Barfield Close in Winchester will be closed to traffic from Monday 9 January 2017 for five months during the next phase of construction of the Chesil Lodge extra-care building.

The closure, between the mini-roundabout outside the Chesil multi-storey car park and the north side of the tunnel on Barfield Close, is necessary for health and safety reasons while scaffolding is put up for cladding the building.

The combination of a narrow road, large construction vehicles, park-and-ride buses and regular traffic to and from the multi-storey car park mean that it is safer to move the footpath temporarily to the other side of Barfield Close and route traffic along Chesil Street.  The closure has been agreed by all parties.

The £15m Chesil Lodge is due to be completed in autumn 2017 and will provide 52 extra-care flats on the site of the former Chesil surface park as part of the City Council’s commitment to provide 300 affordable homes between 2012 and 2022.

“It means that older people, who may have had to live apart in later life as their care needs change, will have the opportunity to live in modern, well-designed flats. 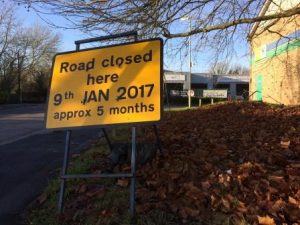