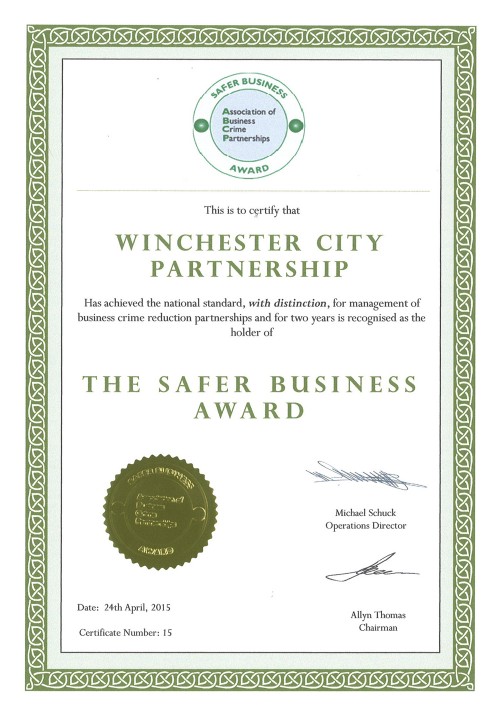 NABCP has developed the Safer Business Award (SBA) to ensure that there are nationally recognised and accepted standards for the management and operation of business crime reduction partnerships. To ensure those standards are maintained, partnerships are inspected by NABCP before being accredited.

It was noted that Jane has excellent working relationships with all agencies including Hampshire Constabulary, Hampshire Fire and Rescue, Trinity Centre, Churches Night shelter, Winchester City Council, Street Pastors. The protocols we have in place demonstrated best practise, particularly with the information sharing agreement created by Jane when she joined the BID in 2013, this allows information to be shared between Hampshire Constabulary, CCTV, PubWatch and ShopWatch, for example banning notices and images so PubWatch members can quickly identify a banned individual.

Projects which were commended included the Best Bar None Winchester scheme, which accredits bars and pubs which are committed to the safe night-time economy of the city, our Purple Flag status and the Spare Change for Real Change diverted giving scheme with donations split equally between Winchester Churches Night Shelter and the Trinity Centre.