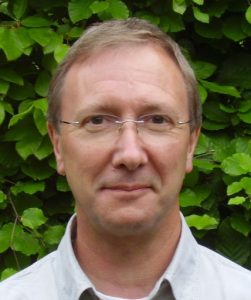 Rowe will be retiring as City Centre Chaplain at the end of April. Howard has served in this role for 10 years, together with the team he has led, visiting staff in shops and offices in the city, listening, supporting and encouraging people when they need it.

Howard will be succeeded by Debbie Veel, who has been appointed Lead Chaplain in the city, and who will take over from Howard in May.
Howard says: “When I first started being a Workplace Chaplain in 2007, I thought I might possibly last a year. It’s now 10 years later, so you can tell how much I’ve enjoyed the job, serving those who work in Winchester shops and offices. I’ve made so many friends, and I will miss them all. My wife is retiring at the same time as me, and we have lots of plans to do new things together. I’m thrilled at the appointment of Debbie Veel as my successor. Debbie is exactly the right person to do this, and you will really like her.

You can contact Howard and the chaplaincy team at chaplain@winccc.org.uk or on 07834 540106 until the end of April, or Debbie Veel from May, at the same id and number.