The Winchester BID represents over 760 businesses in the city, a third of which are independent.

Winchester BID understands that the National Planning Policy Framework allows for considerable flexibility when Winchester City Council considers planning applications, however an eclectic mix of independent businesses make the city uniquely special and we want to ensure that these treasures are protected, together with the conservation and heritage of the city.

In December 2015, the BID facilitated a meeting of independent hospitality businesses, whom represent 10 establishments in the city, to discuss the proposals of the Local Plan Part 2, specifically in relation to the policies surrounding the use of primary and secondary shopping frontages, as per Policy DM7 and Policy DM8 in the publication.

It is apparent that the scale and pace of hospitality businesses opening within the BID boundary has resulted in an additional 900 covers in the past 14 months, and thus created acute competition and only limits growth in the industry.

Many of the national chain restaurants have offered discounts within months of opening in Winchester, which is due to the excess of A3 restaurant developments.

The independent hospitality offer adds to the appeal and vibrancy of the city. They are proud to be able to use local producers within their menus and many are Hampshire Fare members who support the use of local suppliers and farmers. However, the use of good quality ingredients means that these businesses do not want to compete on price with the national chains as it undermines their unique selling point. In addition to this, the sheer increase in establishments has also resulted in a skills shortage of qualified chefs and loss of general staff.

The BID notes that within the Local Plan Part 2 publication, policy DM7, which refers to ‘Primary Shopping Frontages’, there is a protection of A1 retail establishments which states ‘no more than 20% of the defined frontage will be in non-A1 use within 25m of the development as a result of the proposal.’

Under point 6.3.20, the publication states that all A development classes will be allowed for ‘Secondary Shopping Frontages’ and that the provision of this offer benefits from being clustered together, for example along Jewry Street and City Road.

However, we note in the past 12 months, there has been at least 5 new A3 establishments (The Stable, Cote Brasserie, Wagamama, Palm Pan Asia and River Cottage) open in other secondary locations in Winchester, with another earmarked for A3 development at Toni & Guy.

Thus, the BID would recommend, criteria be included in the Local Plan Part 2 to protect the secondary shopping frontages from loss of prime retail space, and support the provision of an eclectic mix of independent businesses in Winchester city centre.

We believe this recommendation supports the National Planning Policy Framework 2012, which states that when drawing up Local Plans, local planning authorities should:

“support existing business sectors, taking account of whether they are expanding or contracting and, where possible, identify and plan for new or emerging sectors likely to locate in their area. Policies should be flexible enough to accommodate needs not anticipated in the plan and to allow a rapid response to changes in economic circumstances.” 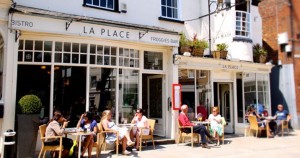